"I have never seen a parent so dedicated to ensuring that their kid could recover from paralysis as you, Marvin." The Doctor chuckled. "This is crazy, but it just might work. Though, I won't be able to let you use this until her bones heal. Also, you'll have to show me that it's safe for you to use first too.

Marvin went back to work at his engineering job over the next few weeks and worked late in the garage building the life sized pair of wings. He worked for hours to ensure the safety of the device night after night. Finally, the wings where ready to be officially tested.

Marvin had Marsha help him with the straps on the wings to his torso. He attached the electrodes to the back of his neck to control the wings with thought. As soon as Marvin turned on the device the wings spread out gently.

"Let's get you out of the garage with those things, I'm afraid your going to hit something with those wings fully extended." Marsha commented.

"Well, She will need to navigate tight spaces from time to time." Marvin replied.

"Yeah, but I think you should give it some practice first, Marvin." Marsha laughed.

"Alright, let's go." Marvin said, as he folded the wings back in at his sides. 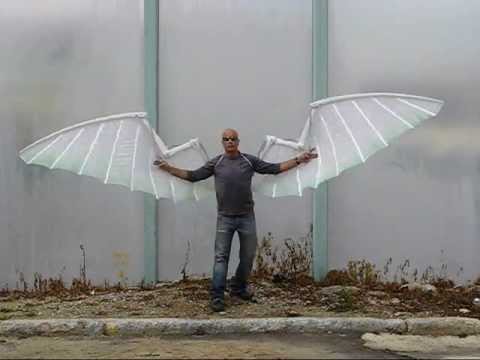 got to the park Marvin extended the wings again to full length. He started to flap them slowly and then tilted them a little bit while still in a standing position to generate lift. Marsha watched in awe as Marvin lifted off the ground and hovered with the wings flapping a few feet above the ground.

"This is amazing!" Marvin laughed.

"Can you land?" Marsha asked.

Marvin slowed the flapping speed and gently touched back down on the grass.

"It's good that I got the hover figured out!" Marvin said excitedly.

"Alright, you can hover and land, but can you fly?" Marsha asked as she put the helmet and go pro camera on Marvin's head. "I'm going to really suit you up this time, if you crash I want you protected as possible."

"Are you trying to make me a marshmallow?" Marvin giggled.

"Marvin," Marsha said with a slightly annoyed tone. "you need to avoid hurting yourself."

"It's gonna work." He replied as he leaned in to kiss Marsha.

Marvin slowly took off into a hover again before he adjusted the wings to fly forward in a horizontal position.

"Yeeeha!" Marvin shouted as he zoomed over the park. He gained altitude and climbed a little higher before making a sharp turn at the edge of the park and then gliding back towards Marsha.

"You've got to try this, Marsha. It's incredible!" Marvin shouted as he prepared to land in a standing position again.

"I'm not sure I could actually control that thing." Marsha replied skeptically.

"Come on, You can get up on my shoulders." Marvin smiled.

Marsha jumped up on Marvin's back and hung on with her arms around his neck like a piggy back.

"Ready?" He asked, as he started flapping the wings and took off.

"I'm surprised that the wings can handle this much weight!" Marsha exclaimed as they soared back and forth across the park together.

"Purposely, I wanted Marsha to be able to do this too!" Marvin laughed.

"You are one incredible Dad, Marvin." Marsha complimented him.

Kalishia came home from the hospital the day after Marvin's flight test. While still immobile, her bones had healed and she was given an exoskeleton to allow her to stand. She still however, had no way to walk.

Marvin submitted the flight test footage to the doctor and they waited for a response.

School would start in a few weeks for Marsha as the summer was coming to an end. Marvin wanted Kalishia to be able to use the wings at school. Though she would be a junior in high school this year, Kalishia had a whole new world to start the year with.

After the Doctor responded with the go ahead, Marvin took Kalishia up to the park for her first flight. He wheeled her over to the middle of lawn where Marsha helped him lift the wings onto her and secure the electrodes. The wings themselves where charged with large solar batteries and Marvin had purchased three of them so that there was always a charged battery to last the day.

"Alright, as soon as I turn this on, your thoughts will control the wings. Visualize them as a part of yourself. I showed you the test flight videos, so hopefully, you have a good idea for flight tequinques by now." Marvin told Kalishia as he did up the last buckle around Kalishia's waist and tightened it.

"Dad, it's okay, I'll be careful. These wings are going to give me my life back!" Kalishia replied.

Marvin reached over her shoulder and flipped the switch. Kalishia immediately extended the wings with a whoosh before Marvin had even pulled his hand away.

"Sorry! I got a little excited." Kalishia giggled.

She gently flapped the wings and adjusted to create lift as she increased the flapping speed. Excitedly she lifted off the ground and then hovered for a minute above ground.

"Wow! I'm flying!" Kalishia smiled back down at Marvin.

She landed perfectly again and then Marvin let her go for a forward flight. Kalishia soared across the park, climbing, diving and gliding majestically. Marvin sat down next to Marsha to watch Kalishia fly.

"She is so strong, Marvin." Marsha said as he sat down on the bench next to her.

"It's amazing to see her happy like this." Marvin smiled.

"You gave her a chance for hope!" Marsha replied.

"Kalishia! You're back!" her friend Nadine exclaimed as Kalishia landed at the entrance to the school.

"Yep, I'm back, and I'm a little more bionic. You like it?" Kalisha asked after they hugged with joyful reunion.

"Yeah! I want wings like that!" Nadine replied. "Can I touch them?"

"Sure." Kalishia said as she extended the left wing.  "My Dad built these for me after the accident. They are beautiful with the feathers he added!"

"Amazing, and they are so soft too!" Nadine smiled. "Are you going to fit through the door though?"

"Yeah, no problem. I just kinda flap and hop sideways through doors. The brace doesn't allow me to move my legs, but it gives me stability to stand." Kalisha giggled.

"I'll grab the door for you." Nadine motioned as they went into the school together.

Kalishia hovered down the hall next to Nadine as she put her violin in the orchestra room.

"Apparently, everyone else thinks your wings are pretty cool too." Nadine laughed. "Everyone keeps looking at you in awe."

Posted by Amanda Evergreen at 7:11 PM